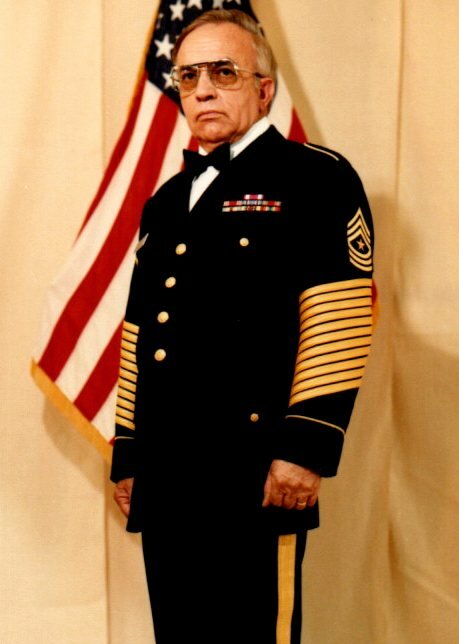 Please share a memory of Robert to include in a keepsake book for family and friends.
View Tribute Book

Robert Junior Lovelace, 97, widower of Janice Buchanan Lovelace, went to be with the Lord on Tuesday, September 27, 2022. He was the son of the late Cary Robert and Bessie Mae Joines Lovelace. In addition to his wife and parents he was preceded in death by his siblings, Margaret Cressell, Grady Lovelace, Donald Lovelace, Mary Patsy Pennington, Irene Taylor and Ilene Martin.

Robert was a 34-year veteran of the United States Army and retired as a Sergeant Major, having served during World War II. During his career he was the recipient of numerous commendations and awards, among them were the Superior Civilian Service Award, Meritorious Service Medal and the WWII Victory Medal. He was a long-time member of North Roanoke Baptist Church and was known for his green thumb and his love of gardening. Among his many accomplishments was his autobiography which took him many years to complete and be made available to the public on Amazon.

He will be missed and remembered by his children, Diane Hylton and her husband Jay, Robert “Bob” Lovelace, Debra Lovelace and her husband Charles Spencer, and David Lovelace; grandchildren, J.R., Christin and Scott; great-grandchildren, Quinn, Kensley, Addie, Aliza, Danielle and Shane; great-great-granddaughter, Destiny; as well as numerous nieces and nephews.

Funeral services will be conducted at 11:30 a.m. on Saturday, October 1, 2022 in the Chapel of Simpson Funeral Home, 5160 Peters Creek Road, with Rev. Daniel Palmer officiating. The family will receive friends from 10 a.m. to 11:30 a.m. on Saturday. Interment with military honors will follow in Blue Ridge Memorial Gardens.

The family would like to say a special thank you to the nurses and staff of Friendship Assisted Living for the care that was shown to Robert.

A Memorial Tree was planted for Robert
We are deeply sorry for your loss ~ the staff at Simpson Funeral Home & Crematory, Peters Creek Road Chapel
Join in honoring their life - plant a memorial tree
Print
Online Memory & Photo Sharing Event
Online Event
About this Event