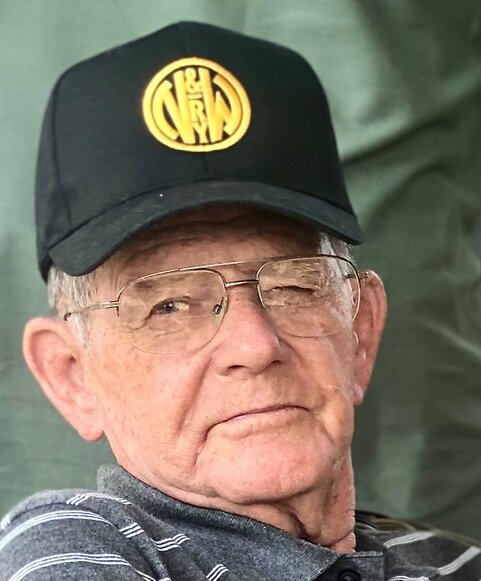 Please share a memory of Dennis to include in a keepsake book for family and friends.
View Tribute Book

Dennis E. Nauman, 90, of Roanoke, Virginia, was called home by his Heavenly Father on Saturday, September 10, 2022.  He passed away peacefully at his home surrounded by his family.

Mr. Nauman was born on October 29, 1931, in White Post, Virginia, one of eleven children of Mr. and Mrs. Floyd Nauman.  He graduated from Stanley High School in 1949 and was drafted into the United States Army in 1950, serving in the Signal Corps during the Korean War.

On July 22, 1950, he married Peggy Viola Hackley, of Stanley, Virginia.  Upon his discharge from the armed services, he began his career with Norfolk and Western Railway (presently Norfolk Southern Corporation) as a telegrapher and station agent.  He was promoted through several positions within Norfolk and Western and, in 1989, he retired as a Superintendent of Transportation with nearly 40 years of service to the company.

Mr. Nauman was a member and Deacon at Preston Oaks Baptist Church in Roanoke for over 55 years, where he was baptized, attended regularly, served on various church committees, and taught Sunday School.

Mr. Nauman was privileged through his later years to have the constant companionship of his beloved dog Mitzi and cat Katie.

Mr. Nauman is survived by his daughter, Gayle Deel, of Roanoke, his son, Douglas E. Nauman (Anne), of Greensboro, North Carolina, and his three grandchildren, Christopher Deel, Sean Deel, and Kimberleigh Nauman.  He is also survived by five sisters, Hazel Tappy, Betty Jean Flores (Charlie), Patsy Caton (Robert), Joyce Comer (Wayne), and Kaye Rickard (Ricky), and one brother, Floyd (Bucky) Nauman, Jr. (Sharon).  He is also leaves behind Tonya Prillaman and Douglas Rhodes whom he thought of as family, as well as a host of neighbors, friends, and extended family by whom he will be sorely missed.

Funeral services will be held at Simpson Funeral Home Chapel, 5160 Peters Creek Road, Roanoke, Virginia, on Friday, September 16, 2022, at 2:00 p.m.with Rev. Joe Green officiating, with visitation one hour before services.  Mr. Nauman will be interred beside his wife in the mausoleum at Blue Ridge Memorial Gardens, in Roanoke, by private service.

The family wishes to thank family and friends for their heartfelt thoughts and prayers during the waning days of Mr. Nauman’s mortal life.  A special thank you to those who kept him comfortable and peaceful in his time of greatest need.

In lieu of flowers, the family requests any donations to be made to the American Society for the Prevention of Cruelty to Animals (ASPCA) of which Mr. Nauman was a member. Arrangements by Simpson Funeral Home (540)366-0707