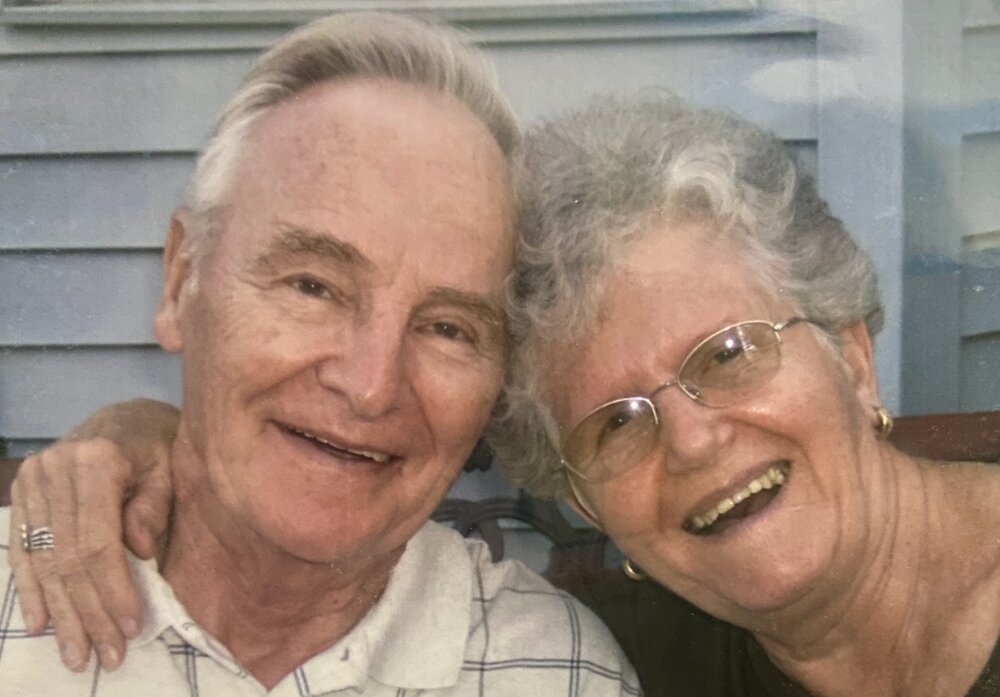 Born on August 2, 1934, to parents Enos John Jarvis II and Laura Evelyn (Wiestner) Jarvis, Jo Ann was the second of four children in the Jarvis household.  Her father was a plumber and a volunteer firefighter in their small town of Clementon, New Jersey.  Her mother was also involved with the community, since she served as the “society news” columnist for their local newspaper.  Jo Ann’s parents were strong believers in the Lord and spent countless hours volunteering at church.  Both being musically gifted, Jo Ann’s father assisted in worship by leading hymns and playing his trombone.  Jo Ann’s mother played the organ and held the position of official church organist for many years.  Because of her parents’ faith, Jo Ann learned at an early age to put her trust in the Lord, too.  Putting feet to her faith even then, she sang in trios and played the piano for church services.

Clementon is a small town in the southern part of New Jersey characterized by flat farmland.  Jo Ann said there wasn’t always a whole lot to do there, so they had to entertain themselves.  They lived very close to a railroad track, so she and her siblings would often walk along the track trying to find flattened coins.  Jo Ann’s parents were also model train enthusiasts. They spent every Christmas Eve staying up all night — with the help of extended family members — putting together an elaborate platform full of trains and villages with the Christmas tree right in the center of it all.  As soon as Jo Ann and her siblings awakened on Christmas morning, they’d come downstairs to find that the living room had been transformed into a Christmas wonderland.

Storytelling was another way for Jo Ann’s family and friends to entertain themselves, and they certainly had many to tell.  Jo Ann loved to recount all the glorious details regarding the chores they had to do while growing up in a household of six.  They gardened, canned vegetables, took care of a menagerie of animals, including chickens and a pen full of beagles used as hunting dogs.  Of course, there was also a lot of cooking and cleaning to do.  But, if they got their chores done, then they’d get to go to Clementon Park: the town’s claim to notoriety.  Clementon Park was to them as Lakeside Park was for those of us who grew up in the Roanoke/Salem area of Virginia.  In fact, there’s even a book written about the amusement park’s history.  It’s entitled, “Clementon,” by Danielle L. Burrows— published by Arcadia Publishing.  Among the pages, you’ll find a picture of Jo Ann’s Girl Scout troop.  On another page, there’s a picture of her family standing in front of her grandmother’s house.

Growing up living close to her grandparents and various aunts and uncles made Jo Ann fond of family gatherings.  One of her favorite memories was when everyone would gather on the porch taking turns hand-churning ice cream.  She didn’t like the churning part too much, but she sure enjoyed the end-product!  Nothing better than homemade ice cream on a hot summer’s day.

After graduating from Lower Camden County Regional High School in 1952, Jo Ann went to night school for a year to learn how to do secretarial work.  On weekdays, she commuted to Philadelphia with her father.  He would spend the day doing plumbing work, while Jo Ann worked at a book publishing company on one of the busiest main streets in Philadelphia.

Then, the inevitable happened:  someone who knew Jo Ann also knew this young chap named Paul… and that mutual acquaintance just couldn’t help himself but to introduce them to each other.  Yes, Jo Ann Jarvis met Paul Jones on a blind date, and it didn’t take long for them to fall in love. Jo Ann had to put her dream of becoming an English teacher on the back burner because her new-found love and she were already talking about getting married.  But, Paul had enlisted in the Army, and he was about to be sent overseas on a non-combat, peace-keeping mission of 20 months in Japan.  Jo Ann’s mother insisted that they wait to be married until after Paul returned from the service, and so they did.  They married on what they had hoped would be an early spring day — March 22, 1958 — but, it turned out to be the exact opposite.  Their wedding date still holds the record for being one of the biggest snowstorms ever recorded for that date in southern New Jersey.  Although it may have been a rough beginning weather-wise, their marriage stood strong through the storms of life for 60+ years, until Paul’s passing on September 4, 2018.

Paul and Jo Ann made quite a pair.  They began their married lives in Greenville, South Carolina, where Paul attended Bob Jones University to earn a degree in History with a minor in German.  Jo Ann’s time was spent caring for their first-born, Susan, who arrived in January of Paul’s freshman year.  Jo Ann also did laundry for many of the young married couples in college there, too, and babysat for their children.  If that wasn’t enough, she also worked part-time in the office of a manufacturing company.  But, Jo Ann’s favorite thing to tell anyone about those college years was that she earned her “PHT” — that’s Putting Hubby Through.

After graduating, Paul found a job in Blacksburg, Virginia, so that’s what originally brought them to Virginia to live.  Jo Ann would give birth to a second daughter, Sandy, while they were living in an apartment near the duck pond next to Virginia Tech.  Paul then got a better opportunity career-wise in Roanoke, so that’s where they were when their third daughter, Jennifer, was born.  And, Roanoke it would be for the remainder of their lives.  When people would share with Jo Ann that they could tell she “wasn’t from around here” because of her accent, she would boldly answer that she was a true Southerner at heart — even before she moved to Virginia — because she had been born in South Jersey.  Bless her heart:  no one from the South ever let her get away with that statement!  However, by living below the Mason-Dixon Line, she quickly grew to love the beautiful Blue Ridge mountains and claimed she would never again live anywhere without mountain views.  With the faint sound of a train whistle in the background, Jo Ann had found the perfect mixture of the familiar and the new.

After successfully managing to get three daughters through the earlier years of school, Jo Ann went back to work outside the home.  She was still qualified as an administrative assistant, although her job titles ranged anywhere from clerk typist to office administrator.  Jo Ann spent many years working as the librarian’s assistant at Cave Spring High School.  That job naturally led her to volunteer at her church’s library, too, which she thoroughly enjoyed.  After retiring from the library, Jo Ann agreed to work part-time for Total Life Counseling.  At that job, she did every part of office work you can imagine; however, her main priority was to process insurance claims for their clients.

You wouldn’t think there’d be time for much else, but Jo Ann managed to squeeze in a love of sewing, embroidery, counted cross stitch, and crocheting.  Every family member knew that if they were celebrating a wedding or a new baby, then Jo Ann was going to crochet an afghan for them.  That’s a lot of afghans, when you consider the fact that Jo Ann had three siblings and Paul had thirteen!  If we include the children and grandchildren of all those siblings, the number is staggering!

Always on Jo Ann’s high priority list was to be actively involved with her local church:  she worked with everything from Vacation Bible School, to teaching Sunday School, to singing, to playing piano, to making costumes, to taking food to folks who had been ill or had experienced a loss in their family, to sending cards of encouragement and sympathy.

Her servant’s heart did, however, find ways to relax.  In her younger years, Jo Ann loved to bowl and even belonged to a league for many years. Floating around in their above-the-ground backyard pool was another fun hobby.  She was quite famous for being able to be in the pool without getting a single hair on her head wet!  But, without question, her heart belonged to the beach.  Even though Jo Ann had travelled to several different countries, the seashore was still her ultimate destination for vacations.  She could comb the beach for hours looking for shark’s teeth and her favorite kind of seashells and never grow weary of it.

It was during those family vacations and important life events when the story-telling gene was truly ignited:  a gene which runs deeply in the Jarvis family and in the Jones family.  At some point, no matter what we’re doing, we’re going to erupt into laughter.  Jo Ann loved those times and happily participated in them; because, secretly, she knew she was often the instigator of it all.  She could get away with it, too, because she had the most convincing, “innocent” expression.  For many years, Jo Ann had a devotional reading hanging on her fridge entitled, “Let them Remember Laughter.”  Her family remembers her so… and always will.

In the quiet stillness of the early morning hours on Tuesday, June 21, 2022, Jo Ann finally got to see Jesus face-to-face!  Her life here on earth ended:  it was time for her heavenly work to begin.

Jo Ann ran the race; she finished the course; she kept the faith.  And, in so doing, she’s now reaping her heavenly reward with her Lord and Savior.  She has been reunited with her beloved, Paul; and, she’s free to celebrate with countless family members and friends who had gone on before her.

Thank you, God, for the blessings that were Jo Ann:  the steadfast belief in God, the kind heart, the hard work, the devoted spouse, and the loving daughter, mother, grandmother, sister, aunt, cousin, and friend we all knew her to be.

~ A Celebration of Life service will be held for Jo Ann at a later date. ~

Preceded in death by:

The family is sincerely thankful for the Surgical ICU team and the Palliative Care team at Roanoke Memorial Hospital.  We also express our deepest gratitude to the Rockbridge Area Hospice team.  With their assistance, the final two and a half weeks of Jo Ann’s life were spent peacefully and comfortably at her daughter Susan’s house in Lexington – surrounded by family and friends – instead of at the hospital.

In lieu of flowers, please consider a donation to:

Click on the “DONATION” tab:  then specify, “in memory of Jo Ann Jones”

A Memorial Tree was planted for Jo
We are deeply sorry for your loss ~ the staff at Simpson Funeral Home & Crematory, Peters Creek Road Chapel
Join in honoring their life - plant a memorial tree
Print
Share A Memory
Plant a Tree
Contact