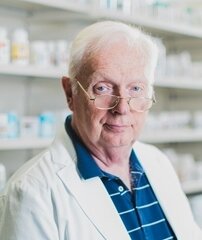 William H. “Bill” Shaver, 78, passed away at Carilion Roanoke Memorial Hospital on February 21, 2022. Born on November 13, 1944 in Ronceverte, West Virginia, he was the son of the late Burr and Betty Crickenberger Shaver.  Other than his parents, Bill was preceded in death by his son Ryan Shaver and his brother Joe Shaver.

Bill was a Class of 1962 graduate of Lewisburg High School in Lewisburg, WV, and attended Marshall University in Huntington, WV; and then graduated at Medical College of Virginia in Richmond, VA, with a degree in pharmacy. He worked for several years as a Pharmacist at Pioneer Drugstore in his hometown of Lewisburg, WV before moving to and spending the rest of his career in Virginia. He retired from Hot Springs Pharmacy in Hot Springs, VA only to continue to work at both New Horizons Pharmacy in Roanoke, VA and HIghland Medical Center Pharmacy in Monterey, VA until his health no longer allowed him to do so.  Bill had a great passion for sports and introduced his sons to the love of golf. Together they played wonderful courses leaving them with many great memories to share. He was a loyal and lifelong fan of the West Virginia Mountaineers and the Cincinnati Reds. An avid baseball card collector, throughout his life he regularly attended card shows in multiple states. His love of fly fishing landed him in many streams with stories to tell.

He will be missed and remembered by his sons, Mark Shaver (Anne) of Roanoke, VA and John Shaver (Marsha) of Lewisburg, WV and his granddaughters Maddie Shaver and Elise Shaver whom he greatly adored.

Per his wishes no public services will be held.

A Memorial Tree was planted for William
We are deeply sorry for your loss ~ the staff at Simpson Funeral Home & Crematory, Peters Creek Road Chapel
Join in honoring their life - plant a memorial tree
Share Your Memory of
William
Upload Your Memory View All Memories
Be the first to upload a memory!
Share A Memory
Plant a Tree
Contact