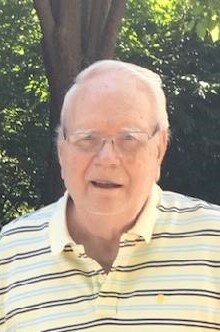 Please share a memory of William to include in a keepsake book for family and friends.
View Tribute Book

William Paul Martindale, age 87, of Roanoke, VA, went to be with our Heavenly Father on January 29, 2022. William (Bill) was born in Roanoke, VA, on March 21, 1934, the son of Raymond Lewis Martindale and Janie Frances (Gravely) Martindale. Bill is survived by his son, Gary Martindale and wife, Christi of Salem, VA; step-daughter, Mary Bell and husband, Lowell of Loudon, TN; grandchildren, Chris and Cameron Martindale, Patricia Shelton, Dustin and Amanda Butler, Michael Tewell, Jamie Hogan, Summer Cannon, Shelbie Estrada and Kaileigh Yancey. He is also survived by 17 great-grandchildren. Bill was preceded in death by his parents; his loving wife, Barbara Ann (Transou) Martindale; his brother, Raymond L. Martindale; his step-son, Mark Tewell; his step-daughter, Lee Ann (Tewell) Butler; and grandson, Joshua Shelton. Bill grew up in Roanoke and graduated from Jefferson High School. He joined the Army Reserves in 1956 and was called up for active duty, serving two years in Germany, from April 57-April 59 as Military Police. He was honorably discharged in December of 1962. Bill met his wife Barbara (Bobbie) in 1964 at the Moose Lodge, where they both loved to dance. Bill and Bobbie married on April 7, 1967 and were happily married for almost 55 years.  Bill worked as a professional self-employed painter until his retirement. Bill was also a talented golfer, who played many tournaments throughout his younger years. He loved multiple sports and shared that love with his son, Gary, taking him to play golf, baseball, basketball and football. He even coached him in baseball. Bill was a devout Christian and loved to share his love of the Lord, even through his Christian poetry. He would want us all to be joyful that he is now with his Maker, participating in worship with angels and believers before the throne of Christ. A Gathering of family and friends will be held Friday, February 4, 2022, from 3 until 5 pm at Simpson Funeral Home (Peters Creek Road).

Gathering of Friends and Family

Look inside to read what others have shared
Family and friends are coming together online to create a special keepsake. Every memory left on the online obituary will be automatically included in this book.
View Tribute Book
Share Your Memory of
William
Upload Your Memory View All Memories
Be the first to upload a memory!
Share A Memory
Plant a Tree
Contact