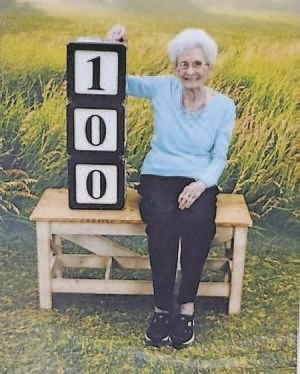 Freddie Lucille Sawyer Leftwich, 102, passed away peacefully Wednesday morning November 27, 2019. Born on May 2, 1917; in Bel Haven, N.C.; she was a daughter of Fanny and Fred Sawyer and sweet sister to her eight siblings. Working in the tobacco fields and running around the farm were activities that represented most of her childhood. George "Burt" Leftwich took her hand in marriage in 1938. They raised two loving girls, moving several times around Virginia. They finally settled in Roanoke, where Freddie had a fulfilling career at Eli Lilly through retirement, all the while a working mom with an endless heart. Her children are Carole Morefield, who married Richard Morefield, and Judy Zeigler, who married Alan Zeigler. When her children were grown and married, she continued as a wonderful mother and became an astounding grandmother. She cared for and adored her two children, five grandchildren, eight great-grandchildren, and was even so blessed to have three great-great-grandchildren. Her grandchildren are Tina Bradow, Vickie Ackerman, Kim Campbell, Cameron Zeigler, and Keri Zeigler Kelly. Travis Bradow, Haley Ackerman, Dane Ackerman, Maria Campbell, Evan Campbell, Lyric Kelly, Liam Kelly, and Lyla Kelly feel incredibly fortunate to call her great-grandmother. Her great-great-grandchildren are Tyler Bradow, Jordan Bradow, and Melanie Bradow. This extraordinary, classy woman was an absolute joy to everyone that crossed her path. She walked this earth filled with God's grace. We all have peace in knowing Freddie is with our risen Lord. Our lives are forever better because of this marvelous woman. Funeral services will be conducted 3 p.m. Saturday, November 30, 2019 at Simpson Funeral Home, 5160 Peters Creek Road. The family will receive friends one hour prior to the service. Arrangements by Simpson Funeral Home and Crematory, 540-366-0707.