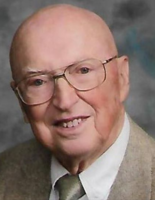 The amazing adventure that was the life of Richard Albert (Dick) Baynton came to an end when he was called home to his eternal life on March 20, 2020. He is predeceased by his father, Gordon Frederick Baynton; mother, Leah Esther (Rhodes) Baynton; sister Peggy Ann Crandall; wife of 63 years, Virginia Elaine (Hubbard) Baynton; and niece Candace (Crandall) Hopkins. He is survived by daughter Penny, sons Jim (wife Peggy) and Randy, grandsons Ben Baynton and Yancey (wife Angie) Vaughn, a great granddaughter, two great grandsons, a great-great granddaughter and many cousins, nieces and nephews and innumerable friends who he regarded as family. Born on Sept. 5, 1927 in Lake Orion, MI, Dick became a force of nature as a kid during the Great Depression. He was a prankster and later a consummate hitchhiker. At the very end of WWII, Dick served as a chemical warfare defense specialist and drill instructor in the US Navy. Following his graduation from Michigan State University (Go Spartans!) in 1949, he found the only true love of his life and married Elaine (Hubbard) on June 2, 1951. Their journey together led to three children, and to homes in Michigan, Pennsylvania, Wyoming, Hawaii, Colorado, Minnesota, Idaho and Virginia. Dick’s career in the building industry led to owning his own home building company, employment with the Federal Housing Administration (FHA) and multiple sales and executive positions with Boise Cascade Corporation, culminating as the National Sales Manager for the Boise Cascade Cabinet Division (now American Woodmark Corporation). In 1975 Dick and Elaine moved to Roanoke and opened Cardinal Cabinet Corporation, which became a training ground for large numbers of professionals still practicing in the kitchen and bath industry. Dick was a founding member of the Virginia Chapter of the National Kitchen and Bath Association (NKBA), and served on the national board of directors. After the 1994 sale of Cardinal (still operating as a branch of Rugby Architectural Building Products), Dick became a business consultant. He earned his MBA from Radford University’s (Go Highlanders!) Davis School of Business and Economics at the age of 71. Dick continued his consultancy until his passing, his crowning achievement being the publication of his book, “The Handbook of Small Business.” He never had a political or social opinion he was unwilling to express, so he jumped at the opportunity to be a columnist with The Roanoke Star News. Dick was a member of the Elks Club and the Big Lick Breakfast Club, where he entertained his pals with jokes or bald-faced lies. During his 45-year membership at Second Presbyterian Church, Dick served as an elder and ruling elder, the Picnic Czar and ever-present greeter/usher. His greatest joy in life was in sharing his smile and quick wit with others. In lieu of flowers, the family would appreciate donations to Second Presbyterian Church, where Dick will be privately interred in the church Columbarium; a public memorial service is being planned at a later date. Arrangements by Simpson Funeral Home.