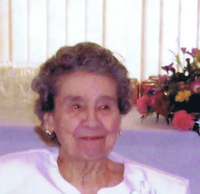 Margaret Elizabeth Morris Pryor passed away on Friday, January 3rd, 2020. Margaret was born to Isaac Allison and Belle Warman Morris in Easton (near Morgantown), West Virginia, on August 31, 1917. Following the death of her father, Margaret, her brother, and her mother moved to Maryland in 1929. She graduated from Mt. Rainier (Maryland) High School in 1936. She married Ralph Walton Pryor on May 8, 1942 (celebrating their 3rd anniversary on VE Day). After raising her children she went to work at the Prince Georges County Board of Elections, from which she retired in 1990. On many family trips to West Virginia, Shenandoah National Park, and the Blue Ridge Parkway, they shared their love of the mountains with their children. Her love for those Blue Ridge Mountains brought her to Roanoke and Brandon Oaks in December, 2001, where she made many friends and was known for greeting everyone by name. She is survived by her children, Ralph (Esther), Charlotte (Randy Harrison), and Rob; grandson, Dan; nephew, Charlie Morris; and great-nieces Britt Morris (Keith Edwards), and Sarah Morris Mattson (Jim). In addition to her parents, she was predeceased by her husband of 48 years, her brother, Charles (killed in action in the US Army in France in 1944), her step-son, Eddie, and her daughter-in-law, Esther. A memorial service will be held 2:00 p.m. Sunday, January 12, 2020 at Brandon Oaks 3804 Brandon Avenue S.W. In lieu of flowers memorial donations may be made to the Brandon Oaks Auxiliary, or Good Samaritan Hospice of Roanoke. Arrangements by Simpson Funeral Home & Crematory.